Palladium has been one of the most volatile commodities in 2022, shooting from under $2,000/oz at the beginning of the year to over $3,300/oz. Since then the price has retreated and consolidated at around $2,000/oz. Many investors are expecting prices to rise now since the price has consolidated, and are looking for ways to invest in palladium. But some of them don’t actually know how to invest in palladium. Even if you do, with so many ways to do it how do you know what is the best?

Our guide on how to invest in palladium covers all the options available, as well as the benefits and drawbacks of each one. We will also cover the potential catalysts for palladium prices to move higher again.

Is palladium a good investment in 2022?

Palladium prices have been constantly rising since the beginning of the year, following the Russian invasion of Ukraine, and expected supply problems. Since then prices have come down sharply, in part due to the expected disruptions in supply not materializing, and the Chinese lockdown which continued to affect demand. Expected lower demand from the auto industry which is over 80% of the demand in the palladium market.

However, the conflict between Russia and Ukraine is only expected to accentuate supply problems in the palladium market. Russia remains the second-largest producer of palladium worldwide, representing nearly 40% of all palladium mined. The current sanctions imposed by Western countries will surely constrain the supply of palladium. 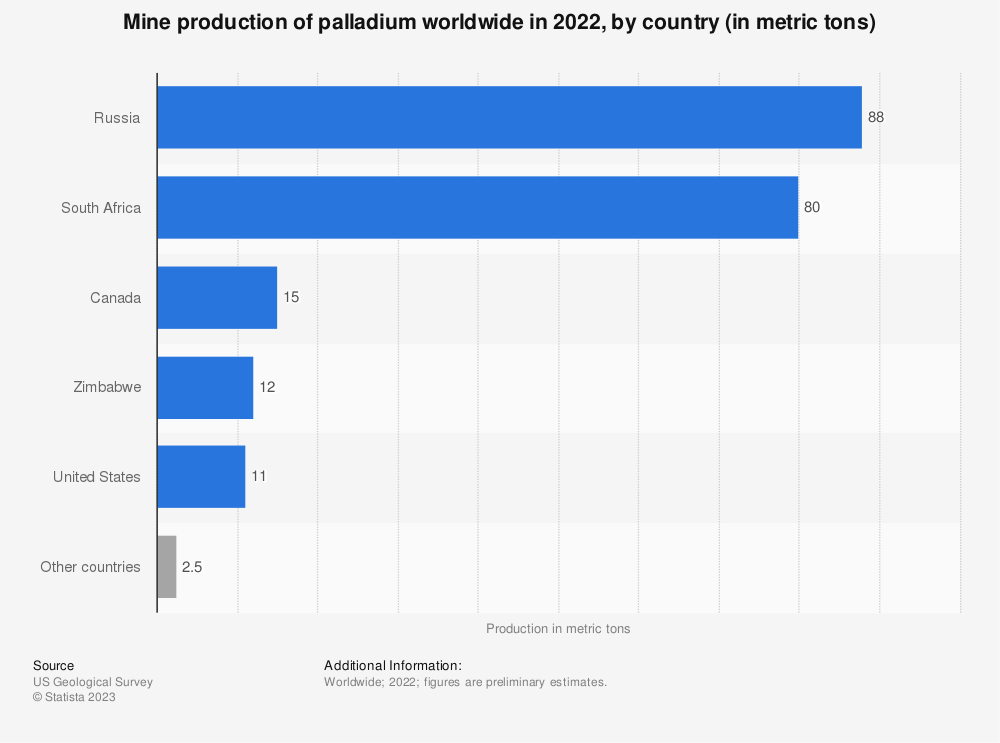 One of the first countries to impose sanctions on palladium was the UK, which implemented a 35% tariff on palladium and platinum imports from Russia. Some automakers are also looking to decrease their use of palladium, and instead replace it with platinum. However, Russia is also the second-largest platinum producer in the world, and that could eventually lead to a similar situation.

Palladium is mainly used by car manufacturers to reduce vehicle emissions, and both diesel and gas vehicles use it. Over 80% of the palladium mined worldwide ends up in the auto industry.

However, with the current push for electric vehicles, the main use of palladium could be reduced significantly over the coming decades. Additionally, some automakers are looking for ways to avoid using palladium, due to the high cost.

However, despite these efforts, the catalyst market is expected to continue growing until 2025, and even if several automakers manage to avoid using palladium, the metal is still expected to be in high demand.

4 Ways to invest in palladium

When it comes to investing in palladium, there are a few options. Each one has its advantages and disadvantages, and you should carefully consider each one. Here are the 4 ways you can invest in palladium:

One of the most simple ways to invest in palladium is by buying physical palladium. Either in jewelry or bullion. However, there are a few disadvantages to this approach. One of them is that you will be forced to pay a premium over the spot price. This means that one ounce of palladium will cost more than the current market price.

Additionally, precious metals do not generate any income at all. This is also why some investors prefer to invest in palladium mining stocks rather than just buying the physical metal.

Lastly, if you decide to buy physical palladium you need to be aware that it can be difficult to sell it, and you will not get the spot price. You will have to find a precious metal dealer that buys palladium, and the price you will receive will have a slight discount on the current market price.

Another common way to invest in palladium is through exchange-traded funds (ETFs). However, the options available are scarce, at least if you want to get 100% exposure to palladium. Here are the main palladium ETFs you can invest in:

The Aberdeen Physical Palladium Shares ETF is an ETF that invests directly in palladium and holds it for investors. The ETF price fluctuates depending on the price of palladium.

The iShares Physical Palladium ETC (exchange-traded commodity) tracks the spot price of palladium and the fund invests in physical palladium.

Finally, the Sprott Physical Platinum & Palladium Trust is another palladium ETF you can consider, however, you need to be aware that the fund is also invented in platinum.  This means that your investment will not be 100% exposed to palladium.

Advantages and disadvantages of palladium ETFs

Palladium ETFs offer a simple way for investors to get exposure to this precious metal. They are easy to transact, and extremely liquid, which makes it easy to open and close positions. Their fees are also extremely acceptable, and it is one of the best ways to invest in the metal without having to research mining stocks or buying physical platinum.

Palladium stocks are a great way to receive additional income in the form of dividends, while also getting exposure to the price of palladium. Some palladium mining companies have seen tremendous earnings growth over the last few years, due to the continuous demand, and increase in price.

Here are some of the main palladium mining stocks you can consider:

Anglo American Platinum is the largest palladium mining company in the world, based in South Africa. It is responsible for ~38% of the supply. Besides that, the company is extremely well run, with operating margins of ~48%, and has managed to increase earnings by 160% from 2020 to 2021 to R79 billion or roughly $4.7 billion.

Anglo American Platinum remains one of the most attractive palladium mining stocks, given its strong balance sheet, and continued profitability. Anglo American also has a current dividend yield of over 9%, which makes it a great way to receive additional income when you invest in palladium.

Sibanye Stillwater is another South African mining company that is one of the largest palladium miners in the world. The company struggled in 2022 with a prolonged strike on one of its main mines that lasted 3 months.

This has pushed the price of the stock down, and the dividend yield is over 12%. Given that the company has continued to increase revenues and earnings extremely fast. Just revenues alone have increased by over 240% from 2018 to 2021.

Compared with Impala Platinum and Anglo American Platinum, Sibanye Stillwater has a lot more debt. However, the company is still in a great financial position despite the market valuing the company at a ridiculously low price. It also owns several assets in the US, where it generates a sizeable portion of its revenues.

Impala Platinum is also another South African miner responsible for a large percentage of all the palladium mined in the world. The company also has very little debt, at just R1.33 billion.

Out of the three palladium mining stocks on this list, Impala has by far the best financial performance over the last few years. With revenues increasing by 270% from 2018 to 2021, and the earnings from 2020 to 2021 have nearly tripled.

The main advantages of investing in miners are the fact that you can receive income through dividends, and also the possibility of higher returns. While commodities can rise in price significantly, as we have seen at the beginning of the year with palladium, the mining stocks usually move even more than the underlying commodity. For this reason, many investors prefer to invest in mining companies over the stock itself.

One of the things to keep in mind with mining companies is that they can be a lot more volatile than the commodities themselves. One of the reasons is that whenever a commodity price fluctuates, so do the expected margins and earnings of the miners.

Additionally, there is also the risk that a certain commodity, in this case, platinum, reaches such a low price that miners become unprofitable. This could make the stock plummet, and it would certainly force the company to slash or halt its dividend.

It is also important to understand that most mining companies, end up mining different metals. For this reason, investing in one of these stocks does not give you full exposure to the price of palladium.

Perhaps one of the riskiest ways to invest in palladium is through futures and future options. This requires a margin account and a lot more capital. You will also face the risk of a margin call if palladium prices plummet.

Although trading futures can be extremely profitable, some retail investors should avoid doing it, because it requires a lot of experience.

Futures options also allow you to speculate on the future price of palladium, and it gives investors or traders a longer period for prices to go up. However, it also requires a lot of capital and knowledge of commodity markets.

What is the best way to invest in palladium?

For most inexperienced investors the best way to invest in palladium is by buying coins or investing in one of the ETFs available. This guarantees that the risk remains low, and this is especially important if you do not have a lot of experience trading commodities and you are just starting out.

If you want to take advantage of income stocks like palladium miners you should stick with the largest ones, that are in a good financial position. The reason is that palladium prices can be volatile, and if you invest in an unprofitable or subpar miner you may lose your money.