The History Behind Bucket Shops 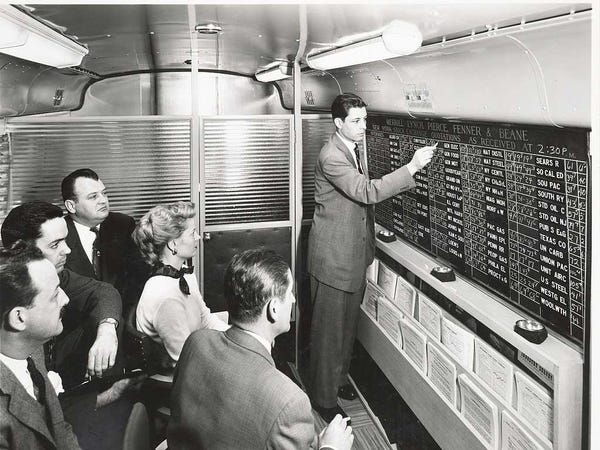 What is a bucket shop?

It was a common type of establishment during the 19th and early 20th century. While appearing to be a stockbroker, bucket shops allowed their customers to bet on price movements of securities. Although some of these speculators were not even aware of how the stock market worked, they were eager to read the tape and pretend to know where stocks and commodities were heading.

The history of bucket shops

It all began in the 1800s in England. These bucket shops were established by unregistered stockbrokers who let their clients gamble on stocks. Instead of the clients profiting, it is the bucket shop that is profiting because they use very unethical and misleading business methods.

Bucket shops’ business model was built on the premise that their customers would choose unprofitable trades most of the time. Therefore whenever a bucket shop processes a certain bet, they are taking the other side of the trade. Since most of the people engaged in this activity had little to no knowledge of how the market operated, they lost money.

Bucket shops would generate not only the profits from the other side of the trade but also by charging a commission on each trade. They originated in England, but soon they spread everywhere. When others heard of how much they could profit from this type of business, they copied the trend and it spread through both Europe and America.

These establishments were eventually shut down in the 1920s. The practice was therefore seen as illegal. Though bucket shops no longer exist, the concept still lives to this day, but in a different way. In fact, it could be said that today’s equivalent to a bucket shop is binary options and CFDs.

How do bucket shops work?

Bucket shops basically had the appearance of a stock brokerage, but transactions and trades were not conducted. Therefore speculators would not own the security. Instead, they would bet on price fluctuations. Most of these establishments used to mark the quotes of stocks and commodities. With the help of the telegraph, stock quotes could easily be transmitted across the country.

The telegraph made these shops even more appealing because gamblers would monitor their trades in real-time. Similarly to what happens in a horse race. Most of the clients who gambled in bucket shops lost their money because these shops were designed to make their customers lose money.

How would clients lose money?

They would benefit from the losses of their clients by deceiving them. There were no financial products transacted in a bucket shop. Instead, customers would simply bet on price movements unknowing to them that the products were not even transacted. The bucket shop charged a commission for each trade and would take the opposite side of the trade. They would mislead their customers, making them believe that their trade was executed when it really wasn’t. No orders were executed and it was simply a bet on the price of the underlying security.

However, it was possible for customers to make a profit if they could accurately predict the movement of a stock or commodity. Despite that most of the customers would often make wrong predictions. Additionally, the bucket shop would charge a commission on each trade.

Most of the people who bet at bucket shops were amateurs with no previous knowledge of the markets. Since they were not familiar with stocks they were simply gambling.

Another origin of the name, “bucket shop” could’ve been because of the shop’s business methods. Some of the bucket shops back then mixed all of the trading tickets into a single bucket, then they separated all of the wins and losses. They then assign the winning or losing tickets to the clients they can profit the most from.

Why are bucket shops illegal?

Bucket shops are illegal due to the unclear way the business is operated. They attract gamblers and not investors while causing mass destruction and were one of the reasons why so many people suffered from poverty in the 1800s and early 1900s.

These establishments had a conflict of interest towards their clients, due to the fact that they profit from their losses. Therefore they are an unfair way of conducting any type of market activity. In 1922, all bucket shops were officially banned, which marked the end of an important era. Bucket shops also allowed their customers to make leveraged bets on the prices of stocks and commodities.