Can a Blindfolded Monkey Throwing Darts Outperform the Market? 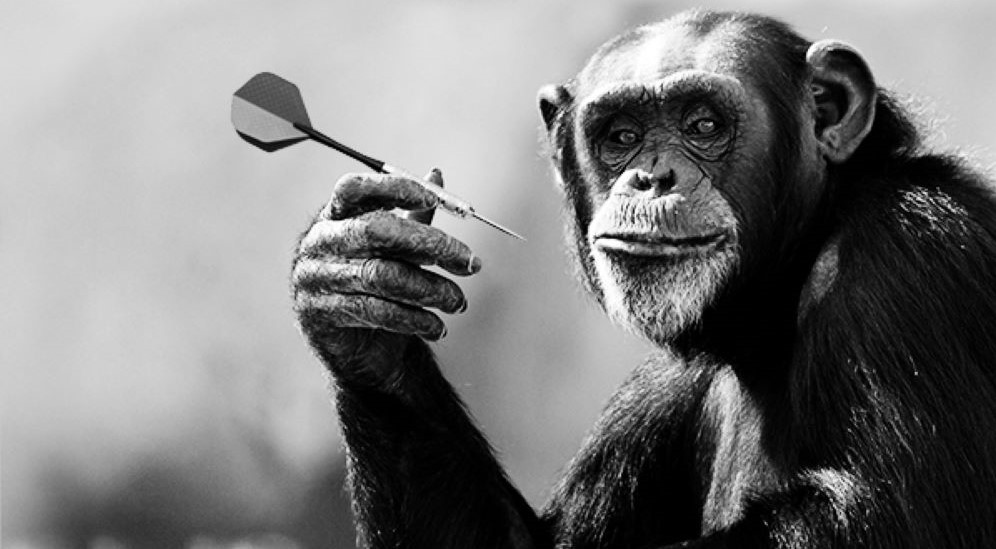 “A blindfolded monkey throwing darts at a newspaper's financial pages could select a portfolio that would do just as well as one carefully selected by experts.”- Burton Malkiel, author of “A Random Walk Down Wall Street”

Burton Malkiel’s metaphor has been one of the most controversial in Wall Street. It questions an active manager’s ability to outperform the market and reduces outperformance to sheer luck. Although the book “A Random Walk Down Wall Street”  was initially published in 1973, this quote still remains one of the most controversial among active asset managers.

It is undeniable that some active asset managers are certainly in a league of their own. Outperforming the market is no easy task, and it requires several abilities that most investors do not have. However, outperforming for a short period of time can be attributed to sheer luck and nothing else. To build a track record of many years is crucial to understand whether a certain money manager can consistently outperform. This does not guarantee future outperformance, and in fact, these managers might have some years or a period of underperformance.

Stock picking is as much a science as it is an art. There is no right or wrong, and different approaches often yield different results. Is Burton Malkiel's metaphor actually true?

Malkiel proposed that share prices change at random, making stock markets totally unpredictable. His remarks about the blindfolded monkey throwing darts would later be tested, which left some active money managers pretty upset about it.

Six months after the first dart-throwing stock picking competition the returns were compared. After the first six months of the experiment, fund managers had the lead. The contest would eventually end in 2001. The experiment lasted for 14 straight years. What were the results?

Well to be fair, there weren’t any monkeys involved in this experiment, and the humans who participated were not blindfolded. That wouldn’t probably make any difference on the outcome. However, active fund managers appeared to have a better return over those 14 years.

The experiment started by the Wall Street Journal was the first but it would not be the last. In January 1999, Raven (the star of Babe, Pig in the City film) shot 10 darts at a dartboard with 133 internet-related businesses. Within six trading days, one of her selections had increased by a staggering 95%! According to George Fisher, author of "The Streetsmart Guide to Overlooked Stocks", Raven's portfolio of 10 randomly chosen stocks beat more than 6,000 internet and technology money managers by the end of the year. Generating an astounding 213% return.

However, nothing lasts forever, and the year 2000 marked the start of a new trend. Raven the stock-picking monkey performed even worse than the pros during the dot-com collapse. Prompting Perennial Financial Services' John Petrick to conclude, "Any monkey with a dart may possibly earn money in a rising market.". Well, this stands true, and apparently, even monkeys blindfolded or not can make money in a bull market.

Over the years several other similar experiments took place. Adam Monk, a former Chicago Sun-Times financial expert, and Brazilian cinnamon-ringtail Cebus monkey chose his stocks by marking them in the newspaper with a red pen. Monk’s picks outperformed the market for 4 consecutive years, from 2003 to 2006. His portfolio ended up outperforming Jim Cramer’s picks during the same year. During 2008, Monk’s portfolio declined only 14%, amidst a market meltdown.

Lusha the circus monkey flourished in 2010 while money managers struggled to walk upright at the tail end of the crisis. According to the Daily Mail, her portfolio surpassed 94% of Russia's mutual funds, almost doubling her starting amount of 1 million rubles ($35,884).

Lusha combined private and state-run stocks. Placing her money in banks that got a Kremlin rescue by choosing eight cubes out of 30 that represented various assets. (According to the tabloid, they increased by 600%.) The Institute for the Economy in Transition's director of monetary policy, Pavel Trunin, had this to say about her luck:

"It demonstrates that financial expertise does not play a large role in forecasting how the market will evolve."

Does a blindfolded monkey throwing darts actually outperform the market?

There aren’t many firm conclusions that we can make based on the experiments conducted. To a certain degree, there is luck and there is a set of different variables that can influence the performance. It is a fact that some active managers are experts on what they do, and they are able to beat the market over the long term. However, in the short term, it does not depend so much on skill as we would like to think. Malkiel’s metaphor still applies, and although some experiments may prove it wrong, his main idea is sound and shows the inability of most of us to constantly outperform any index.

Is Stock Manipulation Illegal? Yes, and Here Is Why
Bull Trap vs Bear Trap: What Is the Difference?
Income Stocks: What They Are and How They Work
The Differences and Similarities Between Bonds and Stocks
Stock Flush: What It Is and How It Works
Capitulation: What It Is and How It Works
What Is Position in Stocks? [Definitions & Examples]
What Is a Whale in the Stock Market?
What Is Consolidation in Stocks? (Explained)
What Does ATH Mean in Stocks? (Explained)
1 2 3 … 54 Next »